Hay is grass that is grown as feed for livestock. Straw is a waste product from wheat and other cereal grain productions.

Straw has also been used as a building material for thousands of years.

Here’s where it gets interesting:

Straw bale homes are incredibly simple to build.  Install a footer, stack bales, square up the wall, plaster, install header. Enjoy the fruits of your labor.

Because of the ease of construction, maintenance appears to be fairly simple.

What we end up getting is an easy to build, easy to maintain, well insulated, renewable building material, that’s structurally sound and long lasting (some straw bale homes from the 1800s are still standing and still in use!). We have a huge oversupply of buildings in the United States.  Which ones are going to survive?  I think that the ones that are of value are not always the ones that were most artistic at the time they were built.  I think adaptability has priority over artistic impact in the long run.  We can fix ugly, as Bofill has demonstrated with this cement factory.  But we can’t fix useless.

So, we embark on a grand, government mandated retrofit. This creates jobs. Jobs fuel the economy. Pulling us out of a recession.

So we create jobs, drive the economy, make money, save money, and the planet is a better place.

And we aren’t doing this why? 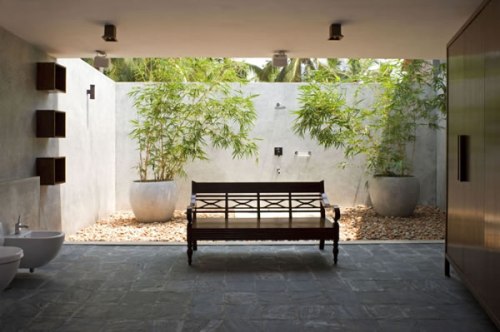 As I’ve stated before, I’m an advocate for smart governing practices. Establishing regulations that foster a free market, develop competition, and nudge people towards the right decisions.

This is a huge step BACKWARDS!

Retrofitting a home with environmentally friendly products cuts down on the costs associated with building a new home.

Consider it this way. The environmental cost (factoring in everything) of building a new home is 100. Completely arbitrary I know, but it makes the example easier.

At worse, retrofitting a home is 99. It still costs less environmentally to retrofit a home, then it does to build a new one.

Lastly, I don’t think Freddie Mac and Fannie May should be saying anything beyond “we’re sorry for screwing up the economy” let alone offering advice on what the impact of a loan will be!

How Much Space Do You Need, Really?

330 square feet of space, 24 configurations. It’s not for everybody, but it should get you thinking about maximizing the  space in your own home or apartment.

It also raises a larger question: When did size start to matter?

For guys, it was probably junior high. We never really got over that locker room competition.

Gary Chang looked at his space, and then maximized it to it’s fullest potential. Imagine a home where every single room is used to its maximum potential. Or a car, or a freeway, or anything else in our lives.

Interesting video, and for once it appears that suburbia isn’t the villain. Ms. Dunham-Jones highlights the opportunities available to suburban communities to redevelop and retrofit themselves to become more sustainable, and nicer looking.

While watching this video I remembered that many city neighborhoods were pre-runners to suburbs, and they came into existence because of: trolleys!

We talk about redeveloping our urban spaces and our suburbs, but what about our neighborhoods?

Our whole building system needs to be reworked. Let’s change zoning laws to allow better integration of businesses and commercial enterprises. Many people don’t walk to work because they can’t!

Mass transit isn’t used because there is no real added benefit. Many times it’s more of a hassle, more inefficient and more inconvenient to take the bus, then it is to drive a car.

Psychologists lament the loss of real community (even Men’s Health talks about it), and one of the reasons I believe this has happened is the lack of “third spaces.” There is no neighborhood diner, coffee shop, bar, or grocery store anymore. Not really.

Applebee’s, Meijers, and others attempt it. But a person still has to drive 30 minutes to get there. I can’t walk out of my house and in a reasonable amount of time walk to a restaurant or grocery store.

Let’s re-design our communities in a more intelligent way!

The buses are powered by natural gas. Meaning a clean fuel source that could easily be converted over to hydrogen or methane.

Combine that with the East Coast Corridor, and I can get all the way up to Maine if I wanted without ever using anything but my feet and various, efficient mass transit systems.

Most Efficient Building In America!

Nuns have built the most environmentally responsible building in the United States! Nuns!

My good friend Joe, likes to keep me informed. Which is good, the more information a person has, the better. And when information is sent to me, I don’t have to work as hard.

The article in question can be found here. It is an interesting point to consider, for all our talk about freedom; we’re slaves to our cars. In my hometown of Columbus our mayor came out and said people don’t want to use public transit because they’re elitists. My dad’s response “It takes me two hours by bus to travel 20 minutes by car.”

General Motors Co,  is no stranger to controversy. But it extends back from todays current debacle through history.

The one I would like to highlight is the Great American Streetcar Scandal. The gist being that GM deliberately sought to dismantle the trolley system in the US. At the time, circa 1920, 90% of the US used rails as the primary mode of transportation. So GM bought trolley companies and replaced them with bus lines.

Whereas you had cars moving around the transit lines with trolleys having the right of way, we now had buses.  Buses who get stuck in traffic jams, bounce over potholes, are frightening to the middle class, and reprehensible to the upper class. I like mass transit, but I don’t ride buses very often.

Call me what you will, but I do have a moment of pause when I ride the bus. Maybe it’s the crazed man facing the wall talking to himself, or the woman coughing up blood beside me. I don’t know why I get an uneasy feeling on the bus.

With trolleys out of the way though, mass transit quickly fell by the wayside. It was no longer the best way to get around town. And because of that, mass transit today is still second chair.

With the leashing effect of trolleys removed, cities could grow ever larger and more spread out. Compare the development of cities like Columbus, Chicago and elsewhere to their development before they eliminated trolley lines. We can only do so much comparison due to huge advances in technology and society, but personally I believe had cities stayed more compact then the keystone movements in American society would have happened much faster. You can ignore what you can’t see (such as pollution, racism, inequality, injustice etc) and if you can’t run away to a suburb you have to address the problem.

Right now it’s easy to walk over the homeless because the 30 minute drive removes you from that. It’s easy to ignore the effects of pollution because industries are located so far from our homes. Unless you’re poor. Effectively then, urban sprawl has developed a neo-caste system in America. If you don’t believe me, look at a map. Find the highest residential property values, the best schools, and the lowest crime rates. Then find the inverses.

(side note, compare the pedestrian deaths per 100,000 in a city like New York to that of Dallas.

Cities Can Save The Earth – the article that started this post.