Something a bit more lighthearted. I have compiled a list of the ten most bad ass environmentalists ever. Using advanced logarithms and compiling programs designed exclusively for Conservance (read: Google, and my own opinion), here is the top ten list of the toughest, coolest, environmentalists.

You’d drink a beer with these guys, but you wouldn’t disagree with them. Obviously Goodall’s work with chimpanzees was groundbreaking and her ongoing defense of Chimpanzees is admirable. However it is her ability to connect individuals to a cause that is truly admirable. She’s a bad ass for two simple reasons:

Chimpanzees and Poachers. Either could have killed her without question or remorse at any time during her visits and research.

John Muir explored the wilderness’ of America in the 1870s, at a time when it really was still a wilderness. More often than not, he could have died and no one would have found him. His observations and writings influenced the formation of modern conservation movements, and his organization, the Sierra Club, is still one of the premier environmental groups in the country. 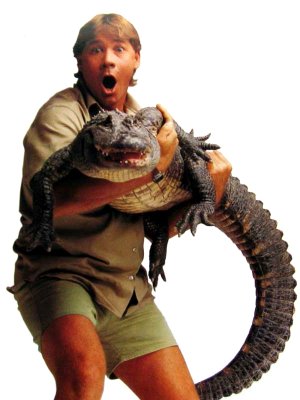 “Crickey! That’s a big one, ah she’s a beaut!” Steve Irwin was unafraid of the worlds most dangerous creatures. And his actions showed that while the natural world can be wild and harsh, it shouldn’t be feared but respected. He was a tireless advocate of conservation and environmentalism, and he did this not by lecturing, but through sharing his passion for the wild. Everyone has beliefs and to the extent that they are comfortable, individuals will act on them. It isn’t often however when someone acts on them to their full end. Thoreau spent two years “living simply” and out of that came Walden and Civil Disobedience, and his later fascination with the natural world. His naturalist writings weren’t taken seriously until the 1970s, but they did provide some impact on the nascent environmental movement.

As a broadcaster, director, and documentor; Attenborough’s work (Living Planet, Blue Planet, Planet Earth, etc) has raised more environmental awareness in everyday citizens and individuals around the world, I would argue, then any other single source. Planet Earth is groundbreaking, in its use of HD and its unflinching presentation of the natural world and our affect on it. Furthermore, Attenborough is just as likely to get close to a dangerous animal as Steve Irwin was. That’s about as bad ass as it gets.

Just look at this guy! Clint Eastwood is one hundred percent bad ass hands down! Combine that with his appointment to the California State Park and Recreation Commission AND the fact that Eastwood squared off against the Governator himself over a highway, and you have a total environmental bad ass!

Black belt in Akido, sheriff’s deputy, and apparently a reincarnated tulku (I’m not making that up! Read his biography on Wikipedia!)His biography reads like a checklist for being a bad ass. Beyond that, Seagal has never needed to raise his voice above a whisper in any movie. Add to this his work for animal rights and the two most bad ass environmental movies ever made: On Deadly Ground and Fire Down Below, and you have a total environmental bad ass.

For starters Ted Nugent’s bad ass standing is already established. I’ve told you before that Conservance is different from any “green” movement there is. Let me prove it to you by declaring Ted Nugent an environmentalist. BOOM! Anthony Bourdain summed up Nugent’s stance on No Reservations quite simply and elegantly: “cut down a tree; plant two trees. Kill an animal; breed two more.”

Nugent goes on to cement his number two standing, “We have this wonderfully productive planet. Eat! Eat, drink, build! Have a good time, but put more back…Shut the fuck up, Sting! You want to save the rainforest you should [expletive] up and go plant some fucking trees!” I’m not sure what the second expletive was, but I like the sentiment!

The number one environmental bad ass is a tie. One highlights the other, and both are the epitome’s of bad ass, as you will soon see.

#1a Rangers in the Developing World’s Parks

These are the nameless heroes who defend parks, wild places, and endangered species the world over. Often the first, last, and only line of defense against dangerous, brutal, and well funded criminal organizations including: gun runners, drug cartels, poachers, black market smugglers, and more. What makes them #1 on the environmental bad ass list is simple: They make a percentage of what they could make through illegal activities, and yet they still choose to put their lives on the line everyday.

Dharmendra Khandal works with the nonprofit “Tiger Watch,” an organization dedicated to protecting tigers in India. What this means is Khandal more often than not, is at odds with poachers, gun smugglers, and the Indian parks service. Yet he still doggedly works to bring poachers and smugglers to justice, and protect the national symbol of his country: The tiger. He is the embodiment of what rangers across the world deal with everyday: too small a budget, not enough resources, and dangerous individuals with money and guns.